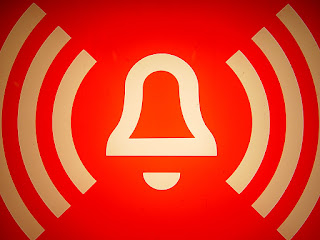 We need more people who will sound the alarm!


Far too often, people want to play peacemaker, but have no desire to stand for what is right.  I have heard the saying too much, "I just want everyone to get along and I feel it is my role to help that to happen."  Now, while I agree in being a peacemaker when it is possible, there are also times that it is impossible. There are times that you have to stand up and say, WE HAVE A PROBLEM!  There is an issue that MUST be addressed.  When peace is possible and not detrimental, choose peace, but don't just choose peace because you are not willing to fight for what is right.

If you You have heard the old saying, you cannot yell fire in a crowded movie theater and not face consequences if it is a lie.  But, what if there is a fire?   Would you sit there and say nothing?  Would you say, I want people to just get along and enjoy there movie?   Of course not!  Well, unless you are a sociopath!    No, anyone in their right mind is going to choose life.  They know that people can watch the movie later.  Yes, it is easy when it is life and death, but a little harder when a life is not on the line.   Guess what?  Usually, the "little" decisions actually have far further ramifications than are initially seen.

A small snowball at the top of a hill may seem inconsequential at first, but if rolled down a snowy mountain can become a deadly snow boulder or avalanche by the time it gets to the bottom.  The alarm must be sounded early if a problem is seen.  You can not walk around with blinders all the time, you have to stand for what is right!  You do no one any favors if you never address the problems you see.  You actually enable bad behavior when you distract others from problems.

I think as a society, we would actually be better adept at promoting peace if we would be willing to tackle, rather than avoid problems.   Wars come to peace treaties when the cause of war is tackled.  Fights end when the cause of the fight is brought to light and addressed.  Enemies can become friends when the problem that caused the feud is finally addressed.

Avoidance solves nothing and actually makes problems bigger!  Want problems to actually go away?  SOUND THE ALARM!   In doing so, you are the real promoter of peace.
God bless and have a great week!

Matthew 18:15 “If your brother sins against you, go and tell him his fault, between you and him alone. If he listens to you, you have gained your brother.

Romans 12:17 Repay no one evil for evil, but give thought to do what is honorable in the sight of all.

Popular posts from this blog

August 31, 2020
I'M OVER IT!  Yeah, that is probably not the best way to open a blog post that you want people to read, but it properly describes my feelings towards virtually everything...  There is a popular trend on Tik Tok right now that describes our world right now.  I am not going to encourage you to go find it, because it does have profanities in it.  I came across it by an accident.... But after I saw it, my thought was, this is America right now.  A guy yells, what's your name and the other guy answers, and then he yells a profanity back at him.  Then the other guy says, what's your name, and the bit repeats itself.  These guys obviously did not know each other, just got introduced, and were divided.  Yes, I know it is a Tik Tok and is meant for entertainment, but it is a picture into our lives today in this country, in this world...  Ok, let me explain myself a little and if you will indulge me and walk with me on this to it's conclusion, I think we will find ourselves on
Post a Comment
Read more

Standing at the Precipice

November 28, 2018
All of us who know Christ are standing at the edge of something big!  Why?  Because of the fact that we are indwelled by the Spirit of God and empowered by Him.  The big thing is different for each of us and the biggest thing that we are standing on the edge of is an eternity with Him.  But the big does not have to wait for eternity.  There are big things that Gd wants to do in our life now.  So what is holding us back?  The truth is it is our own fears and insecurities coupled with the desire to please others rather than Christ.  Far too often we allow the opinions and desires of other people to dictate what we will do for Christ rather than Christ himself.  You takes those opinions and then mash them together in the blender of life with our predicting fears and it is a recipe for a life full of doing NOTHING!   God desires to do exceptionally great things in our lives.   He takes us to the edge of a precipice, shows us the wonder out things He has made, extends His hand, and says
Post a Comment
Read more